Many recreational and professional athletes frequently perform 5-15 minutes of low to moderate intensity exercises or movements after their training or competition in an attempt to improve recovery and hereby enhance subsequent performance and reduce injuries. This recovery method is widely known as a cool-down. Does a cool-down however actually improve post-exercise recovery? In a recent comprehensive and freely-available review published in Sports Medicine, Jonathan Peake and I attempted to answer this question by analyzing more or less all research that has investigated the effects of cool-downs on psychophysiological recovery.  Click here to read it, or read the most important conclusions below.

I also recorded a 5 minute video in which I discuss the findings of our review:

What is a cool-down?

Before I can summarize all findings, we first need to agree on what we consider as a cool-down. We defined a cool-down as “an activity that involves voluntary, low- to moderate-intensity exercise or movement performed within 1 h after training and competition (Van Hooren & Peake, 2018).” Important here is therefore that we did not include studies that investigated the effects of ‘active recovery’ performed on the next day after exercise, for example cycling the day after a hard soccer match. Further, we were interested in investigating whether performing an active cool-down was better than doing nothing at all, which we have referred to as a passive cool-down. This involves sitting, lying, or standing (no walking).

Does it improve recovery?

Ideally we also need to investigate whether different active cool-downs have different effects, while simultaneously considering the different training or competitions performed and individual characteristics. For example, is it more effective to perform low-intensity cycling or running after the training/competition? And is it more effective to do this for 30 minutes or 10 minutes? Does the cool-down set-up differ if I have performed 15 minutes of high-intensity swimming or a 90 minutes of soccer match? And finally, should the cool-down be different for a well-trained athlete and a recreationally trained individual? Unfortunately, we cannot answer all questions as there is simply not enough research out there that has investigated all these specific effects. I hope this blog and the review will however provide you with some useful information to optimize your cool-down, if you decide to use it.

The effects of an active cool-down on sports performance are arguably most important for individuals interested in improving their performance. Specifically, an active cool-down may be beneficial when athletes recovery better and hence can perform better during their second training session or competition later on the same day (which mostly applies to elite athletes training twice on the same day or having to perform multiple competitions on the same day) or during the next day (which also applies to recreationally active individuals training and competing once a day).

Conclusion for effects on sports performance

Based on these findings, it is not advisable to perform a cool-down to improve same-day performance. A cool-down could however be performed in an attempt to improve next day performance, although it is most likely to have no substantial effect.

In theory, a better recovery may result in less neuromuscular fatigue and thereby decrease the risk of injuries during a subsequent training session or competition. A second potential benefit of an active cool-down is therefore a reduced risk of injuries. Unfortunately, only a few studies have investigated the effects of an active cool-down on injuries, and this has usually been investigated in combination with stretching and a warm-up. It is therefore not possible to make definite conclusions about the effects of a cool-down on injuries. Nevertheless, most studies did not find significant associations between regular use of a cool-down an reduced injuries in runners and triathletes. However a study among dancers found that a group performing 15 minutes of cool-down had lower injury rate than the 5 and 10 minute group, but no control group was included for comparison. These findings suggest that a cool-down does generally not affect injury rates, although more research is required to investigate the effects of the type of cool-down, its duration, and the type of sport. Importantly, there is currently also no evidence for an increase in injury rates with a cool-down.

At a more fundamental level, the goal of training is to stimulate the release of various biochemical messengers that activate signaling pathways, which in turn regulate molecular gene expression that elicits an adaptive response. Several coaches have long believed that doing a cool-down accelerates the recovery of various biochemical messengers and hereby reduces the adaptation to exercise, for example by resulting in less improvements in muscle mass or endurance performance. Indeed, it has been shown that recovery interventions such as antioxidant supplementation, nonsteroidal anti-inflammatory drugs, and cold-water immersion can influence signaling pathways, thereby attenuating the long-term adaptive response to exercise. If the goal is to improve adaptation, these recovery interventions should therefore not be used regularly after training. In contrast, if the goal is to maximize recovery before a completion, these recovery interventions can be used, but at the expensive of less adaptations.

Preliminary evidence from one study suggests that an active cool-down consisting of 15 min moderate-intensity jogging does not attenuate the long-term adaptive response in well-trained intermittent sport athletes (Wiewelhove et al., 2018). In fact, the group that regularly performed an active cool-down after training even obtained a higher lactate threshold after 4 weeks of training compared with the passive cool-down group, potentially as a result of the extra training volume completed during the active cool-down. These findings suggest that coaches and athletes should perhaps not worry about the potentially reduced adaptation due to a cool-down because the increase in biochemical messengers due to extra training volume completed during the cool-down may compensate for the reduction in biochemical messengers as a result of the faster recovery (see also the section on muscle glycogen re-synthesis in this blog or the review for another potential benefit of doing a cool-down on the adaptation). It should be noted however that conflicting findings have been reported for the effects of other recovery interventions on the adaptation to exercise and more research is therefore required on this topic.

What about the psychophysiological benefits?

Lactate has traditionally been associated with fatigue and has therefore frequently been investigated as an objective indicator of recovery. A large number of studies have shown that lactate is indeed removed faster from blood with an active cool-down compared to a passive cool-down, when the metabolic intensity of the cool-down is low to moderate (Figure 2 A & B). However, lactate is not necessarily removed faster from muscle tissue where it traditionally is believed to matter mostly by impairing contractile functioning of the muscle fibers. Whether this is correct is something beyond the scope of this blog, but it is briefly discussed in our review. Nevertheless, the practical benefits of  faster lactate removal are debatable. Several studies for example reported no difference in blood lactate concentration measures more than 20 minutes after exercise and blood lactate indeed returns to resting values after high-intensity exercise within 20-120 minutes even without any active cool-down (Figure 2B). Even elite athletes do not usually perform another training session within 90 min after the preceding session and faster removal of lactate by an active cool-down may therefore be largely irrelevant. In the review we discuss other issues with lactate as a marker of recovery in more detail and I refer the interested reader to our review. For now I will conclude that lactate is generally faster removed from blood, but the practical relevance of this is doubtful.

An active cool-down increases the blood flow to muscles and skin and this may reduce the accumulation of metabolic by-products and factors associated with muscle soreness and accelerate muscle repair and remodeling. Most studies do however not show beneficial effects of an active cool-down on delayed-onset muscle soreness or tenderness at different times following exercise, ranging from immediately after exercise up to 96 hours after exercise, although there are some conflicting findings. These conflicting findings may be related to factors such as the intensity, modality and duration of the training and cool-down and the training experience of the athletes. It remains however unclear in which situation a cool-down would be beneficial to reduce soreness. Overall, these findings therefore indicate that an active cooldown is generally not effective for reducing delayed-onset muscle soreness following exercise. It should be noted tough that most studies did use protocols that do not reflect everyday training (e.g., walking backwards downhill) and more research is required to investigate the effects of ‘normal’ training such as a 90 minutes soccer match. Nevertheless, I expect the effects to be even less prominent because ‘normal’ training will induce less muscle soreness than a specific soreness protocol and recovery has therefore a reduced potential to affect soreness.

The amount of muscle damage that someone feels does not necessarily reflect actual damage to the muscle. Therefore, even though an active cool-down is generally not effective for reducing delayed-onset muscle soreness, it may have beneficial effects on muscle damage. Muscle damage is however more difficult to measure than the feeling of muscle soreness. Several studies have measured muscle damage using indirect markers such as creatine kinase and measures of muscle strength (Figure 3) and it can be questioned how accurately these indirect markers reflect actual muscle damage. Nevertheless, these studies reported conflicting findings, with most studies reporting no significant beneficial effect of an active cool-down and other studies reporting some small benefits.

Stiffness and range of motion 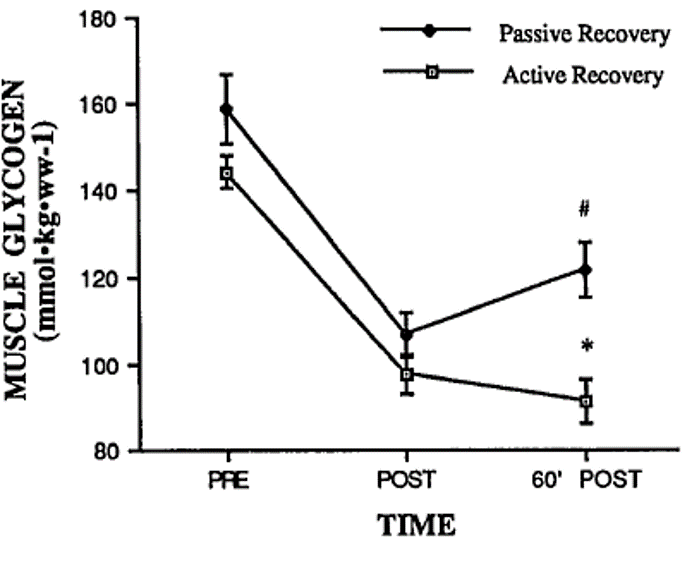 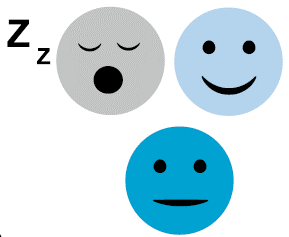 An active cool-down therefore generally does not substantially influence measures of psychological recovery after exercise, but interestingly, the participants nevertheless usually perceive an active cool-down as more beneficial than a passive cool-down. This could reflect that the questionnaires did not adequately assess psychological recovery, but it can also reflect a placebo effect, whereby individuals believe that the active cooldown is more beneficial than a passive cool-down due to the popularity in society and its proposed benefits. An interesting study by Cook and Beaven (2013) for example found a correlation between the perception of the effectiveness of a recovery modality and subsequent performance that was of similar magnitude to the correlation observed between physiological recovery and performance, suggesting that the perception of a recovery modality can also have a major influence on its effects. These findings imply that the active cool-down should be perceived as beneficial by the individual to maximize the potential beneficial effects.

Now that I have discussed some of the effects of a cool-down, we can try to answer the question posed in the title of this blog: do we need to perform a cool-down after exercise?

The mode, intensity, and duration of a cool-down and activity preceding the cool-down will likely influence the effectiveness of the cool-down on recovery and these effects may also differ between individuals. It is therefore difficult to recommend one optimal active cool-down protocol for all individuals in all situations which might maximize the beneficial effects and minimize negative effects. Some general guidelines can, however, be provided. An active cool-down should:

(3) be shorter than approximately 30 min (and perhaps even < 15 min) to prevent substantial interference with glycogen resynthesis;

(4) Involve exercise that is preferred by the individual athlete to maximize the potential beneficial effects; and

(5) some evidence also suggests that an active cool-down should involve the same muscles as used during the preceding activity.

There are many more interesting aspects of cool-downs which I have not discussed here, such as the effects of a cool-down on the recovery of the immune system which may be of relevance for avoiding illnesses, the effects on cardiovascular and respiratory system which may be of relevance for avoiding syncope, and the effects of foam rolling and static stretching, which are frequently performed in combination with a cool-down. For a comprehensive overview of all effects and more details in the discussed effects I refer you to the freely-available review. 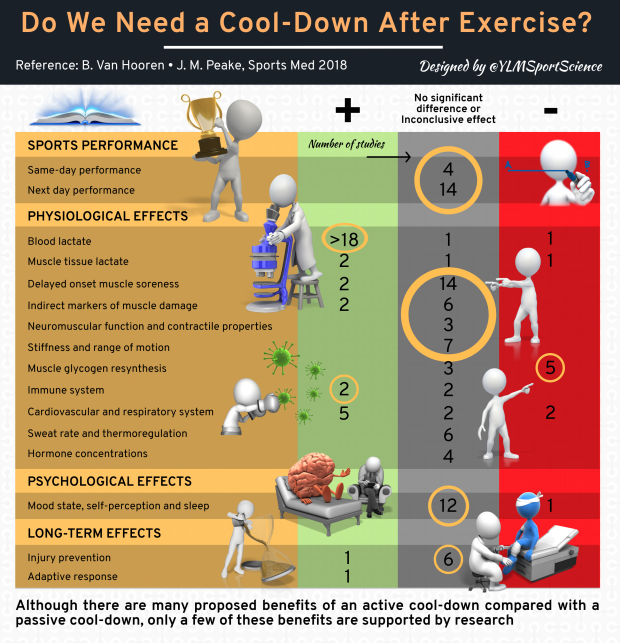