Growth and maturation of children leads to numerous changes in the body such as altered hormone concentrations, development of the muscle-tendon complex and development of the central nervous system. It is widely believed that these changes result in special periods called “sensitive periods” during which training is extra effective at improving performance or preventing injuries.

For example, the long-term athlete development (LTAD) model proposes sensitive periods for five general motor abilities: suppleness (flexibility), speed, skills, stamina (endurance), and strength, based on biological and chronological age for boys and girls (Figure 1). The ages 7–9 years and 13–16 years are, for example, proposed as sensitive periods to train speed in boys, whereas a sensitive period to train aerobic capacity is proposed before peak height velocity (the phase in which growth is fastest). These sensitive periods have also been adopted in the youth training models of many governing bodies around the world such as the Dutch tennis LTAD model and Canadian rowing LTAD model.

In this blog I will discuss three reasons why you shouldn’t use these sensitive periods to train youth athletes.

Although this reductionism is helpful to reduce the complexity of sports to five manageable constructs, it incorrectly implies that there are distinct motor abilities that can independently be trained and each have separate sensitive periods. Such simplification for example implies that maximum running velocity (speed) can be improved independently of coordination or strength. It further implies that the sub-systems that mature and are involved in coordination are different than the sub-systems involved in speed or strength, resulting in separate sensitive periods for these general motor abilities.

Second problem: how to train the sensitive periods?

A second problem is related to the lack of information about the training method(s) that should be used during the proposed sensitive periods (1). It is for example unclear whether (sprinting) speed during the proposed sensitive periods should be trained using specific sprint training, plyometric training or resistance training, while their effectiveness likely differs. The effectiveness of the method will determine whether larger adaptations can be induced during the hypothetical sensitive period. Interestingly, while the LTAD model suggests to train speed during peak height velocity, there is some evidence that sprint training during the hypothetical sensitive period is actually less effective compared to sprint training pre peak height velocity. Numerous other studies show similar findings that collectively indicate that motor skills or derived general motor abilities may only be extra sensitive to certain training methods and not to all methods that can potentially be used to train the motor skill or derived general motor ability.

Third problem: the effect of prior experience

LTAD models do also not clarify whether the sensitive periods and their content differs between individuals with varying experience levels and different training backgrounds, even though it is widely acknowledged that athletes with less experience in a structured training program and lower technical proficiency should generally perform less advanced exercises than technically proficient athletes who may be younger (1). This may affect the possibility to use the potential sensitive period. For example, a 17-year old athlete with no prior resistance training experience will likely first perform low weight resistance exercises before continuing with heavier weight exercises, hereby potentially not allowing him to (optimally) benefit from the proposed sensitive period for strength training. Similarly, studies have also found associations between genetic factors and training adaptation.

Collectively, this suggests that the most appropriate training modality during the hypothetical sensitive period may differ between individuals depending on the previous training experience and genetic predisposition (Figure 2), which is not taken into consideration into the proposed generic periods.

“The most appropriate training modality during the hypothetical sensitive period may differ between individuals depending on the previous training experience and genetic predisposition, which is not taken into consideration into the proposed generic periods.”

These findings indicate that each motor skill and derived general motor ability can be trained by many different methods, and each training method is potentially most effective during differing stages of development. The effectiveness of a training method also depends on the characteristics of the training (and competition) such as the amount of resistance, sets and repetitions, the duration of intervals and rest periods and the total load of activities undertaken at school, other sports and regional and international teams. Finally, the effectiveness of training differs between similar biological aged individuals based on their previous training experience and genetic predisposition. These findings therefore question the validity of generic sensitive periods as proposed in many athlete development models and have indicate that youth trainers, researchers working in the field of pediatric exercise science and developers of athletic development models should no longer rely on generic sensitive periods as proposed on LTAD models, but rather train all physical attributes during all stages of development.

Interested in more information on this topic? Have a read at the freely available scientific article I published here. 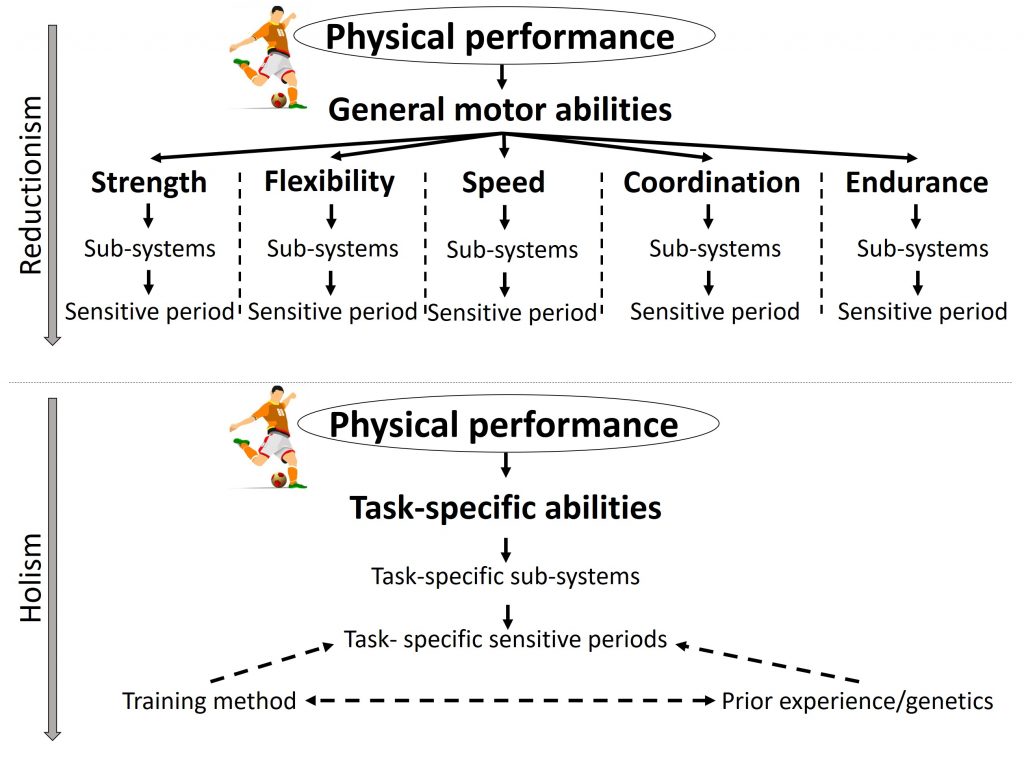