When its heavily raining or snowing, cold, or simply too dark outside to safely navigate the route, many runners prefer to log miles on the treadmill rather than outdoors. However, there is much debate on whether running on a treadmill is similar to running outside. In this blog post I will therefore briefly discuss this issue based on two systematic review papers were we attempted to review all of the research that investigated physiological, perceptual/psychological, performance and biomechanical differences between treadmill and outside running (Miller et al., 2019; Van Hooren et al., 2020).

I will start of discussing whether a 1% incline is always required in treadmill running. When you run outdoors, you move in relation to the earth and therefore you will need to displace the air that is in front of you. In treadmill running you don’t need to displace this air since you stay in approximately the same place relative to the earth. At a given speed it’s therefore a little bit easier to run on a treadmill. Based on this fact, a lot of people believe that you need to set the incline of the treadmill to 1% to make up for this difference. This believe is based on a study that showed that running at a 1% incline takes the same amount of energy as running outside at the same speed on level ground (Jones & Doust, 1996). What many people don’t realize is that this effect has not been replicated in other studies as we showed in our meta-analysis of all studies performed until 2019 (Miller et al., 2019). In Figure 1 you can see the results of our meta-analysis. This figure shows the mean difference in oxygen cost (a way to measure energy consumption) between treadmill and outdoor running for studies that used a 0% incline, a 1% incline and the (weighted) average of all studies. The first black diamond represents the overall result of all studies that compared oxygen consumption between treadmill and outdoor running when the treadmill incline was 0%. You can see that the oxygen consumption was only a little lower in treadmill running (by 0.55 ml/kg/min), with the difference being statistically non-significant. Indeed, the only studies that showed the 0% condition to result in statistically significant lower oxygen consumption were the study by Jones et al. (1996) discussed before and another study by Aubry et al. (2018), with all other studies showing non-significant differences, and two studies actually showing a little higher oxygen consumption. In other words, these findings show that you don’t necessarily need to use a 1% incline to match energy usage in both conditions. 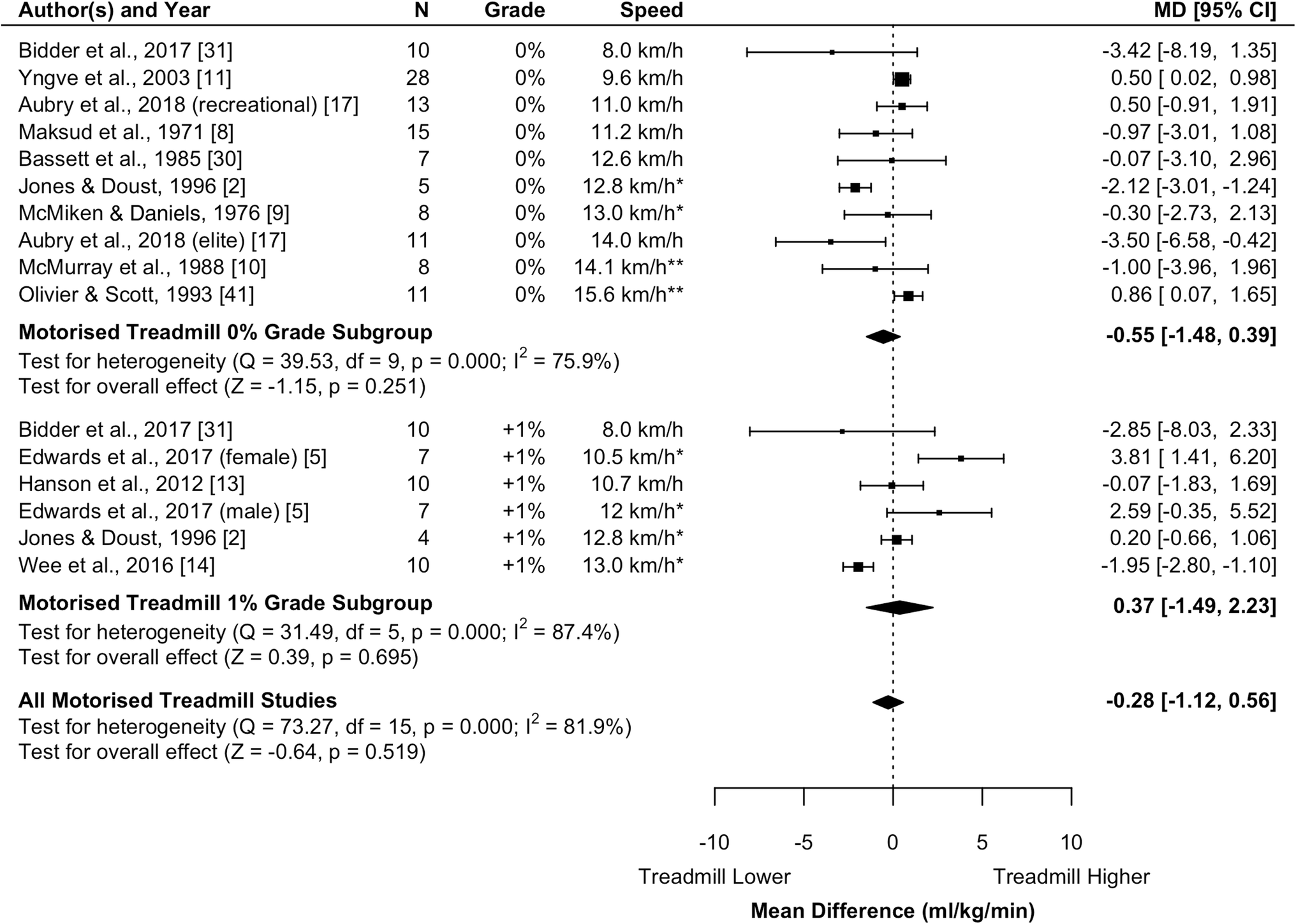 Figure 1. Random-effects meta-analysis of submaximal oxygen uptake during treadmill compared to outdoor running. Subgroup analysis based on relative treadmill grade. See text for more explanation about this figure, or the original publication for all details.

The critical reader may argue that you displace the air in front of you at a faster rate when you run at higher speeds, and this requires more energy. Therefore, you could suggest that a 1% incline would only be required at higher running speeds. This is also something we investigated as shown in Figure 2. The figure shows that the difference in oxygen consumption (again, a measure of energy use) does not really increase with increases in running speed in speeds below 16 km/h. Additionally, since in Figure 1, the studies are ordered from slow to faster speed, you could also just use that figure to see if you can see any trend (I don’t see it). Therefore, for most recreational runners, there is no need to set the treadmill inclined to 1%.

“For most recreational runners, there is no need to set the treadmill incline to 1%.” 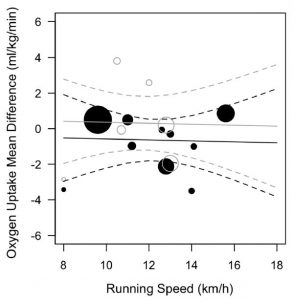 Figure 2. Random-effects meta-regression of submaximal oxygen uptake during treadmill compared with overground running based on running speed. Subgroup analysis based on relative treadmill grade. Positive values indicate outcome measure is higher for treadmill running. If treadmill running would be easier then overground running, the mean difference would increase with an increase in running speed. Note: grey and black values represent 1% incline and 0% incline.

Do you run slower on a treadmill?

Most runners will say that running on a treadmill is boring and they will argue that it actually feels harder than running overground on the same speed, a finding also found in our meta-analysis (Miller et al., 2019). A result of this is that most runners will select a lower treadmill running speed when asked to run at the same speed as they run outdoors, and when they are blinded to the actual speed. Or, if they know the speed and can select the same speed, it simply feels harder to run at the same speed. This is likely because there is no air flow that cools you down, and there is no change in the environment that normally causes distraction from the signs coming from your body about any fatigue. Therefore, you are more likely to notice any fatigue, making it feel harder to run on the treadmill.

In our second review (Van Hooren et al., 2020) we have also discussed another common believe about the treadmill running: “you don’t have to push-off as hard in treadmill running because the treadmill belt pulls your leg under your body, while in outdoor running your body has to move over your legs.” Comments such as these often made by well-meaning coaches and even by some scientists, but they are actually not true. It simply does not matter whether you’re moving over a surface or whether the surface is moving beneath you (if you are moving at a constant speed and neglect any effect of air resistance). This is because you will have to push-off in outdoor running to move forward, but in treadmill running you have to push-off equally hard to prevent being dragged backwards with the belt during the ground contact phase.

Do you use a different running technique on the treadmill?

Finally, we also investigated whether runners run different on a treadmill compared to outdoors. This is important to know because if runners use a different running technique on the treadmill, this could result in different training effects, and it could also impact assessments performed on the treadmill, for example in running-shoe stores when they asses your footstrike and prescribe footwear, or in the clinic when rehabbing from an injury.

We showed that there are only very small biomechanical differences between treadmill and outdoor running (Figure 3), with most differences being so small that they are practically irrelevant (Van Hooren et al., 2020). For example, when running on a treadmill, most runners have a higher flexion of the knee at the moment when they touch the ground. However, this difference is so small that it is considered irrelevant for most practical purposes. Importantly, any differences could be explained by factors such as differences in the hardness of the treadmill surface and outdoor surface and differences in how many strides per minute people make on average when running outdoors and on a treadmill, and were NOT due to different push-off requirements. 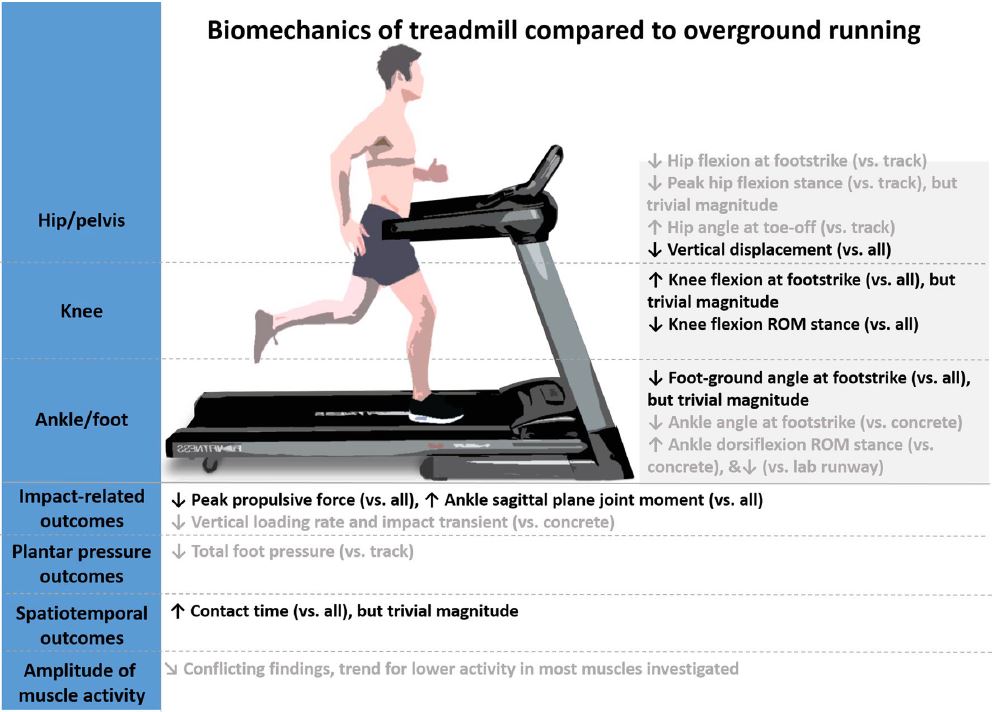 What are some practical applications of our findings for performance, rehab and injury prevention?

Although the energy cost of treadmill and outdoor running are largely similar, treadmill running could have some different effects on performance, primarily because pacing is not really required (i.e. you don’t have to pay attention that you don’t run to fast or slow) and this may therefore also not be learned. Further, from a biomechanical perspective, the differences in some biomechanical variables can be relevant for performance and injuries as we extensively discussed in our review (Van Hooren et al., 2020). For example, treadmills with a relatively soft surface can be preferable in rehabilitation settings as they will reduce vertical loading rates and transient peaks compared to stiff outdoor surfaces, such as concrete as we showed in the review. It is however important to realize that differences in the hardness of the surface will also change your running technique and muscle activation, hereby potentially changing the training stimulus and leading to mode-specific adaptations. Further, there is likely a trade-off between lower impacts in treadmill running, but also more regular stride dynamics (meaning each step will be more similar). This will result in the same tissue being subjected to more repetitive loading compared to running outdoors, which in turn may increase injury risk. Finally, we also found that bone forces on the tibia were lower, but forces on the Achilles tendon were actually higher in treadmill running. Therefore, treadmill running may be beneficial for runners rehabbing from a stress fracture, but not when rehabbing from an Achilles tendon injury.

Overall, we investigated and found much more than discussed in this blog, so I encourage you to read the actual papers, which can (freely) be downloaded here and here. Some questions that we discuss in the papers for example include if the maximum heart rate is similar, if the VO2max is similar, whether assessing which running shoes you need to use is affected by running on a treadmill and much more!

Treadmill vs. outdoor running: Which one is best for performance, rehab and injuries, according to science
Tagged on: 1%    Biomechanics    Energy    Incline    injuries    Outdoors    Outside    Overground    Performance    Running    Technique    Treadmill

3 thoughts on “Treadmill vs. outdoor running: Which one is best for performance, rehab and injuries, according to science”